An in-depth conversation with the Nigerian visual artist on her thoughtful creative process, influences and more.

This week, we’ll be publishing short profiles, essays and interviews on the theme of “Afrofutures.” Together these stories will be a deep dive into the way African and diaspora thinkers, technologists and artists view a future for Africans in the world and outside of it.

Take a look at our introduction to Afrofuturism here.

We’ll highlight and celebrate young, leading talents who already put into practice what a future with black people look like through their work in the return of our profile series, ‘NextGen.’

Stephanie Nnamani, also known as Teff Theory, is the Nigerian visual artist, essayist, photographer and self-portraitist whose art is comprised of a distinct use of color. Hailing from Enugu, the creative’s work serves as a form of spirituality and dissection of identity, culture, personal development and self-expression.

Her gaze is that of an individual going through life’s hurdles as a black woman, a first-generation immigrant and a surveyor of life’s many color palettes. Check out our talk with her below.

This interview has been edited for length and clarity.

Audrey Lang for OkayAfrica: Tell me about the name Teff Theory—where does it comes from?

Stephanie Nnamani: My nickname comes from my name, Stephanie, and it evolved over the years—reflecting on my growth not only as an artist, but also as an individual. I just recently changed it to Teff Theory because I felt like it was something that offered me a space to really explore my works. ‘Theory’ came from my background in social science and it’s my way of expanding on how I like to explore certain concepts. People like to say art is separate from science, but they really cross with each other—at least in my experience it’s been so—and I like to communicate that in my use of colors and lines of repetition and shapes.

What is your creative process?

I tend to write something in terms of an essay and poetry and it ends up translating itself in my photography or in my graphics—it’s never really intentional. I look at a picture and I’m like holy shit, the colors really look like the same colors that are captured here. That wasn’t even intentional. So I noticed that synchronicity was happening within my work to the point that now it’s very much intentional.

I try to create work that is communal. One piece like a photo communicates to the next photo and you can’t really consume one photo without looking at the next one. I really believe it’s like a network.

Do you spend a lot of time producing work?

I once secured my school’s greenhouse and was in there from 8:00 a.m. until my class at 5:00 p.m. I still can’t quite part with creating work that only makes sense to me. There is an unspoken sort of pressure to actually work for a larger audience. Much of my work is not published. I just sit and look at it. I’m sitting on at least 10 unpublished works and I really like to take my time. I value taking my time both for the process and with just sharing it with anyone basically. 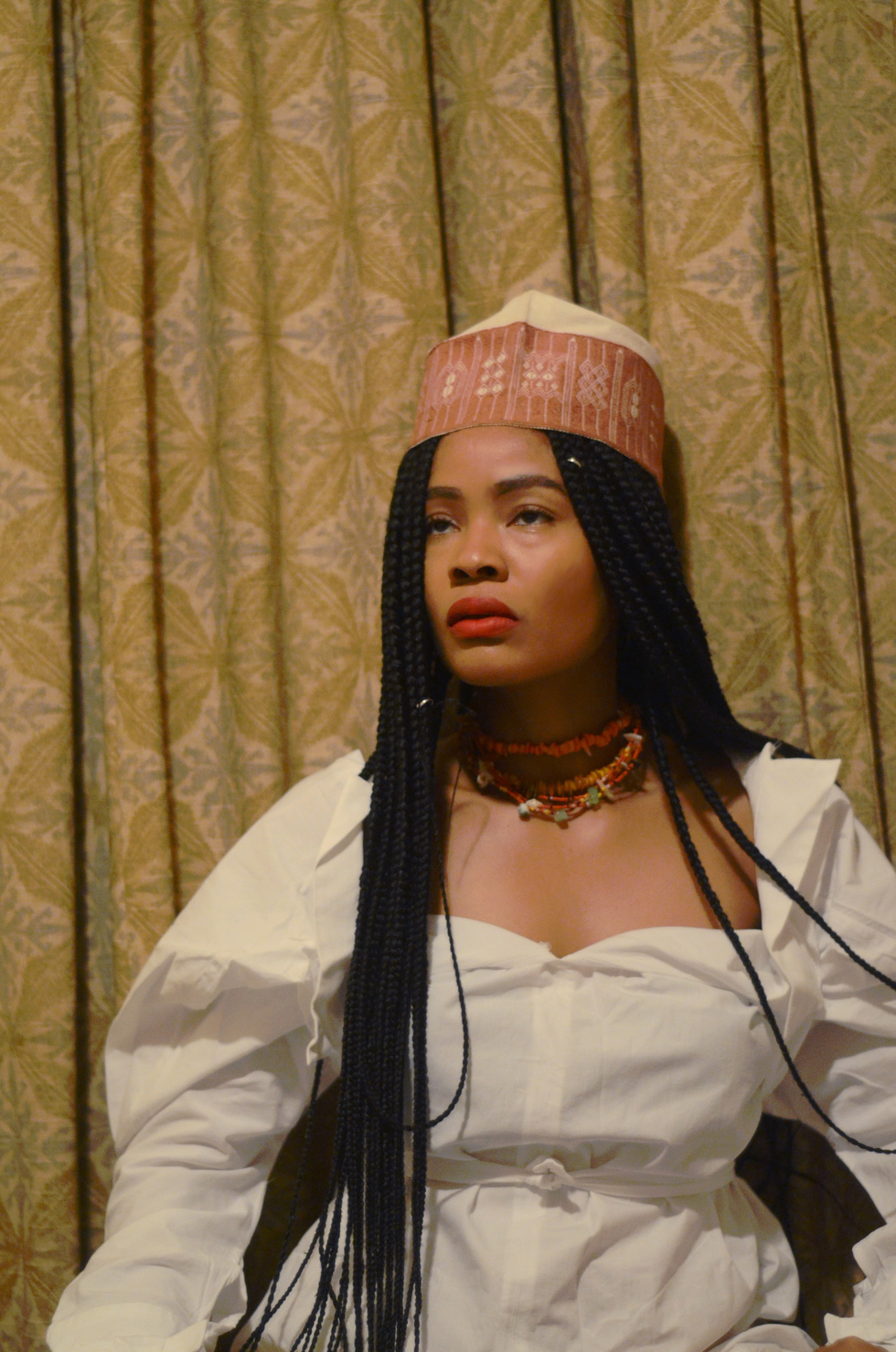 Photo by Stephanie Nnamani, courtesy of the artist.Do you create art full-time?

I work in research as a data collector. I’m always working—always watching people. Even though I’m more of a homebody; it’s always interesting to watch how people respond to things, especially since my primary interest is with media and personality.

Can you tell me about the woman behind behind the art?

We moved to the United States when I was young and before that we moved to London. I guess the older I get, the more obvious that aspect of my identity is apparent. Being a first-generation immigrant is very much the chief aspect of my work and examining the nuances of what that reveals about my self, my purpose, and my work. I’m the youngest girl in my family and I also come from a family of six. Because I am a first-generation immigrant, my immigration status in this country has been ambiguous for much of my stay here. So a lot of the work that I did, I didn’t want to connect to my name until there was some certainty connected to my status here in this country.

We are at the helm of an age in which women are empowered and in which black people are empowered. I wanted to ask you what you think the term Afrofuturism means or what it means to you. If by chance, do you feel like you’re part of that terminology or that realm of art?

It is almost as if for an African artist to be received largely, their art has to align with ancestral aesthetics and I wholeheartedly support that, while also elevating the idea that there should be a more vast concept of what constitutes African art. The concept of Afrofuturism is not one I’ve considered in depth to put forth a cohesive definition of what it means to me. I think there are creatives like Lina Viktor and Trevor Stuurman whose work serves the African identity and is what I would suppose is Afrofuturism. Afrofuturism pays homage to Africa and entertains it in the present not just the future. 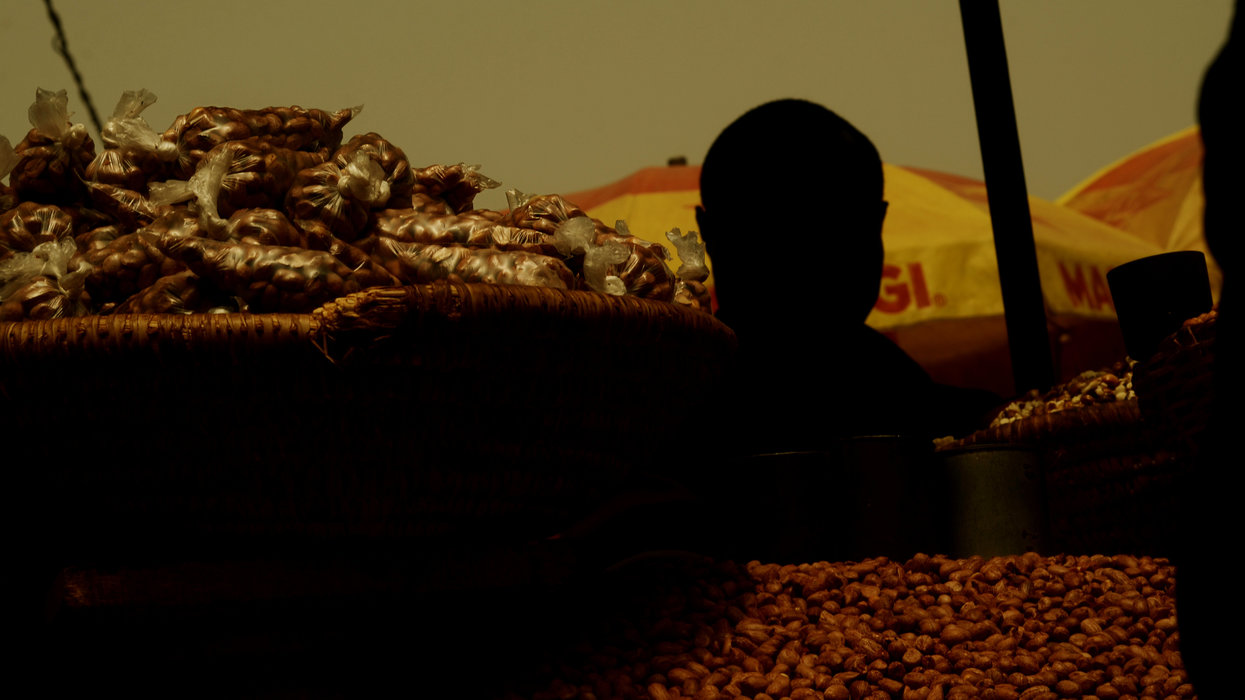 Photo by Stephanie Nnamani, courtesy of the artist.

What are the most notable companies you’ve collaborated with?

Getty Images would be the most profound that I can name. I am a creative contributor for them. They picked up one of my recent projects that I did last year. It was widely received and they invited me to speak on a panel in London a few months ago. I’m currently working on a project for them that I can not speak on right now.

Your work is said to convey women’s empowerment, as well as concepts of identity, culture, personal development and self-expression. Is there anything else?

You might have hit it all. A certain part of my work that I want to communicate is that it tries to reach individuals who share a similar narrative as me, whether they’re first or second or third generation, who return home, the way in which they embrace home and the challenges that they face in terms of language barriers or simply not knowing how to re-immerse or establish intimacy. I throw it in there as often as possible for anyone else struggling with that to know that you know they’re not alone and that it is quite a process—I really try to communicate the concept of absence and presence and otherness.

What does color mean to you?

When I was younger, my mother liked to dress me in red. When my dad would travel and he would come back, all my outfits were either red, orange, or red orange. I never thought about until a recent interview. That’s when it occurred to me that that was my introduction to color as a subject, color as a means to expand expression, color as a means to communicate identity. Color has always been a thing, with my mom extending this to me, and I retained that. It repeats itself without me trying. My work has been very much committed to expounding on how color has essentially brought me home.

Audrey Lang is an alumna of Northeastern University and a Boston-based site merchandiser. A surveyor of life who’s enamored with all things fashion, art and Africa, keep up with her on Instagram and Tumblr. The Christian Mind in Modern Nigeria